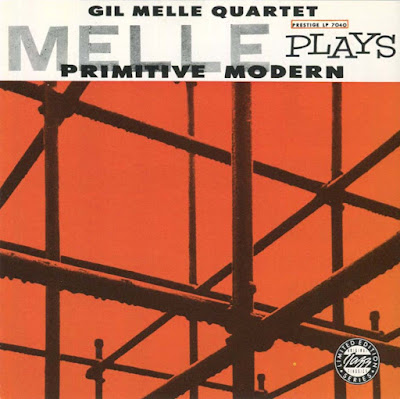 Gil Mellé is an endlessly fascinating character not only in jazz but life in general: baritone saxophonist, artist, scientist, inventor, composer of soundtracks (The Andromeda Strain, Starship Invasions, Kolchek The Night Stalker). His focus was not jazz from the 60's onward, so his recordings are relatively few for a man who lived til 2004.

I re-visited this album for a recent show and discovered it was way above par. Arguably Mellé's best jazz release; the melodies are memorable and there is a marked enthusiasm in the band that includes frequent collaborator Joe Cinderella (another fascinating fellow) and the ever-creative drummer Ed Thigpen with Billy Phillips on bass The leader called his unique blend of classical, jazz and avant garde "Primitive Modern Jazz" - hence the title. The album is his first for the Prestige label and falls snugly between the Blue Note release "Patterns in Jazz" and "Gil's Guests".

The set opens rather unusually with "Dominica"; a 'jazz dirge' for a recently deceased friend that is both dreamy and gripping in it's starkness, Slow modern classical sections alternate with brief swing reprieves. Mellé reveals in the liner notes that Bartok was a big influence and we get a taste of that here. The uptempo frolics of "Ironworks" dispel all gloom with triangle solos and an insanely fraught and jaw-dropping solo from Cinderella. Virtuosity wonderfully abounds from all. After an enigmatic guitar opening, "Ballet Time" reveals a catchy, almost Monk-ish tune over a carefree medium swing, with Mellé at the top of his improvising game.

Side 2 begins with an aptly titled "Adventure Swing"; forward thinking harmony paired with a complex but catchy theme. A certain ambiguity of emotion throughout makes room for thoughtfulness for both the artists and listener. Another contagious theme and happy-go-lucky feel comes with the curiously titled "Dedicatory Piece to the Geophysical Year of 1957" written on a formula of Mellé's. Another interesting element of the album is mutual improvising - while Cinderella is giving it all, Mellé is also improvising at a lower volume to great effect. Finishing the album is "Mark One" which wanders from a similar 'easy' feel to intriguing uncertainty during the bridge, with more fine interplay and smooth brushwork from Thigpen.

Mellé definitely appears to feel liberty and release moving from Blue Note to his new label, since he manages to pull of his fairly heady concepts with both aplomb and a certain amount of glee. The Prestige re-release includes Mellé's in depth liner notes, as well as an entire second album "Quadrama" - a mix of more quirky originals and two Ellington standards. Highly recommended for something different! - Kendo