While It's Fresh In My Mind - Rusty Bryant 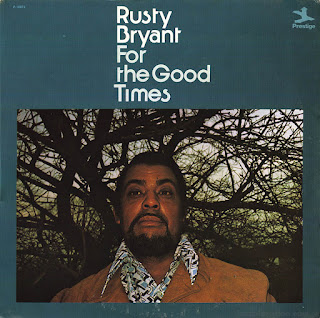 While It's Fresh In My Mind...
Rusty Bryant – For The Good Times
(Prestige Records 1973)
I almost passed up on this one the other day... thinking it was a Ray Bryant album (no relation). The record store I was at would never let any hot item slip into the $5 bin, so I knew it wasn't going to be that funky; plus that title song – all I could remember from childhood was depressing country.

I'm about a year new to the Rusty Bryant party; what I've learned to expect is consistently tasteful and satisfying sax solos and great tone. This album is no exception, and can be picked up on that strength alone. He's a great, overlooked tenor player; mixing melodicism and expertise almost magically.

Producer Ozzie Cadena's intentions couldn't be clearer on the first side; recent and in some cases spanking new pop hits in an easy listening manner. Fortunately there's no string section, just an insanely killer lineup. Bryant's pleasing manner and soul bring Kris Kristofferson's maudlin title track into listenable territory, with the unmistakable sound and drumming of Steve Gadd taking it a few
notches above schmaltz. I can only imagine how far Cadena's eyes bulged out of his face when Hank Jones took his electric piano solo on the otherwise subdued “Killing Me Softly”, because he unleashes! It's awesome. Bryant's lone original “The Last One Out” is chill and memorable – throughout the album we have guitarist Joe Beck being Joe Beck (bluesy and wonderful) and Gadd's frequent partner in crime Tony Levin on bass.

Gadd is the focus of much of side two's “Appalachian Green”. His in-your-face toms give more of a West African feel to guitarist Don Hales' composition. For “A Night In Tunisia” the band teases an uptempo intro, but then proceed to take it slower than you'd ever think would work, and it's a groovy delight. Next up? Why, The Partridge Family's recent “Looking Through the Eyes of Love” of course - a bright and fun rendition of a good tune.

Overall, I'd say get it if you see it. It's not classic, but it's very fine.


Check out my jazz livestreams on Mixcloud !